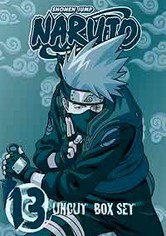 2002 NR 3 discs
When the man who owns their favorite restaurant learns that his daughter has been kidnapped, Naruto and Choji set out to find her and quickly surmise that the abduction is motivated by the restaurateur's secret recipes. Later, when the residents of the Land of Birds begin seeing ghostly visions of a "cursed warrior" known as Noroimusha, Lady Tsunade sends Naruto, Neji and Tenten to investigate.