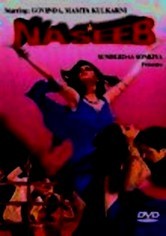 1998 NR 2h 18m DVD
In this Hindi musical, Kuhla (Govinda) is a filthy-rich tycoon who drowns his sorrows with copious amounts of alcohol. To add to his despair, Kuhla realizes that the man he just hired is married to Pooja (Mamta Kulkarni) -- a woman he once romanced but was not permitted to marry due to his poor status at the time. Now, the tycoon still wants to be with her, but money doesn't seem to be enough to fulfill his desires.