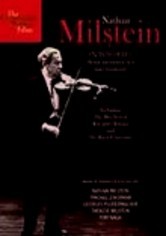 2006 NR 2 discs
Among the 20th century's most revered violinists, Nathan Milstein gave live performances until the age of 82. Award-winning filmmaker Christopher Nupen presents an intimate portrait of the musician, set against a soundtrack of Milstein's final concert recital in 1986. The film features Milstein's interpretations of Beethoven's "Kreutzer" Sonata and Bach's Chaconne.