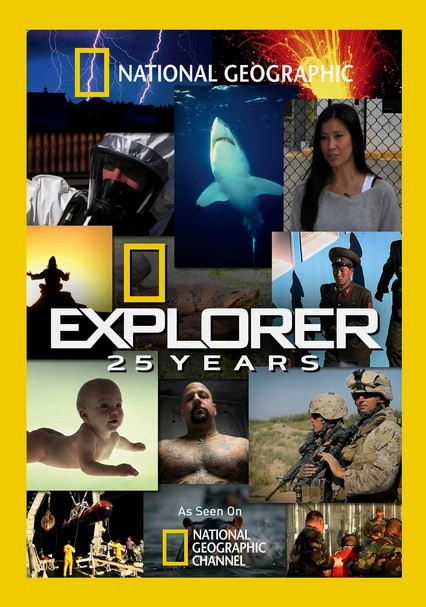 2010 NR 1h 30m DVD
Celebrate "Explorer's" 25 years of compelling programming with this commemorative special that recaps such show highlights as an undersea expedition to the Titanic wreckage, a tour of the Guantanamo Bay detention center and a report from North Korea. Throughout this documentary television series' quarter century on the air, its viewers have visited more than 100 countries and learned fascinating lessons about science, wildlife and humankind.

Parents need to know that this fascinating documentary series offers insight on a wide variety of subjects, from the evolution of helicopters and the intricacies of gang life to the life of Jesus and Indian residents' efforts to battle elephants wreaking havoc on their villages. The show's detailed scientific and historical focus is unlikely to grab little kids' attention, and parents will likely want to keep young viewers away anyway due to the strong violence (both real and re-enacted) that accompanies some topics. For example, one episode included multiple scenes of snakes biting or constricting humans and swallowing prey (in two instances, human prey), and photos showed animals dissected, dismembered, and bloody. That said, families of older tweens and teens will learn a lot from this well-researched series.

Depending on the subject matter, photographs and re-enactments can be gruesome. One episode included scenes of snakes constricting and killing prey and swallowing animals and parts of humans. Dead animals are used in experiments and dissected.

There's a lot of educational material in this show, which often includes strong messages of conservation and respect for the environment.