National Geographic: In Search of Easter 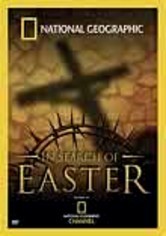 National Geographic: In Search of Easter

2004 NR 1h 0m DVD
&NFiNational Geographic&NFi_; journeys 2000 years back in time to ancient Jerusalem to investigate the disappearance of Jesus Christ after his death in the hope of gaining new insight into widely varying accounts of the resurrection. This fascinating film includes a bonus featurette, "Quest for Noah's Flood," in which Titanic discoverer Dr. Robert Ballard explores the Black Sea for evidence of the epic flood.