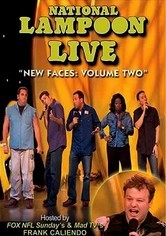 2004 NR 1h 30m DVD
The comedy stylings of some of the freshest faces and most offbeat characters in stand-up are showcased in this second volume from National Lampoon -- the outfit responsible for madcap, gut-busting films such as Animal House and Vacation. Hosted by Frank Caliendo (from "MADtv"), the show features live performances by up-and-coming comedians including John DiResta, Sam Tripoli, Bert Kreischer, Tess and Steve Byrne.