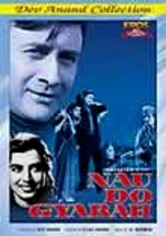 1950 NR 2h 50m DVD
Raksha (Kalpana Karthik) is set to go through with an arranged marriage, until she gets cold feet. While on the run, she meets Madan (Dev Anand), who's about to pick up an inheritance but finds that two of his relatives have stolen the money. Now, the only way Madan can get his inheritance is for him and Raksha to pretend they're married; instead, Madan is accused of kidnapping her. As he's taken to jail, Rashka searches for the truth.