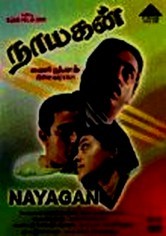 1987 NR 2h 27m DVD
After seeing his union-activist father brutally killed by a policeman, a young boy runs away to Bombay, where conditions force him into a life of crime, and he eventually becomes a Mafia don in this gripping drama based on a true story. Often considered India's answer to The Godfather and featuring a scintillating finale, director Mani Ratnam's action-packed tale stars Kamal Hassan as the underworld kingpin.