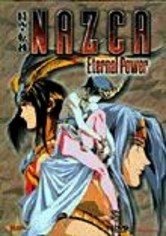 1998 NR 1h 15m DVD
The legends of the Western and Eastern hemispheres merge in this 10th and final chapter of the Nazca animé saga. To cleanse the Earth, kendo master Tate -- the reincarnation of the Inca lord Yawaru -- launches a campaign in the present to unleash the destructive force of the Peruvian god Iriyatesse. His opponent, Kyoji, vows to stop Tate from unleashing the all-powerful force that threatens to destroy the planet.