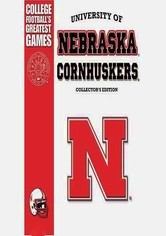 2008 NR 5 discs
Enjoy five of the Nebraska Cornhuskers's most exciting classic football games with this collection, which allows viewers to re-experience some of the greatest players' most spectacular moments. The mighty Huskers have captured five national championships. Shown in their entirety, the games are the 1971 Orange Bowl, the 1982 regular season game against Oklahoma, the 1995 Orange Bowl, the 1996 Fiesta Bowl and the 1998 Orange Bowl.