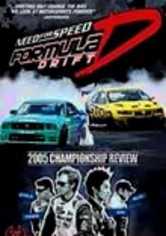 2005 NR 2h 18m DVD
Feel the rush as some of the best drivers in the business test their limits at the 2005 Formula Drift Championship, the only professional drifting series in the world. Featured competitors include Rhys Millen (of The Fast and the Furious: Tokyo Drift), Ken Gushi and America's most daring drift team, the Drift Alliance. Extras include onboard footage from all six cities in the championship -- from Chicago to Houston.