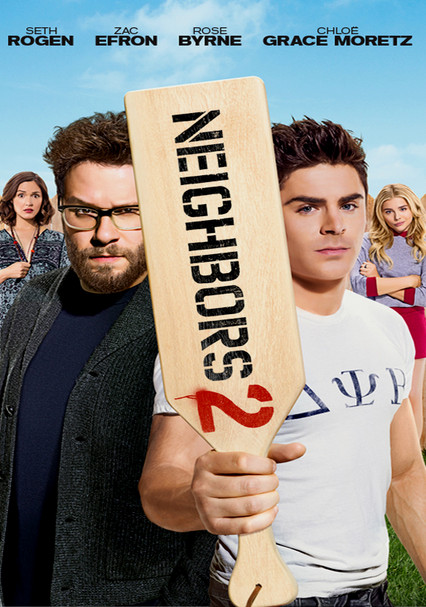 Parents need to know that Neighbors 2: Sorority Rising is, like the first Neighbors, a hard-R comedy featuring tons of crass jokes, strong language, and almost non-stop underage substance use (mostly marijuana and beer) -- this time with even younger central characters (the sorority is started by first-year students). Once again starring Zac Efron, Seth Rogen, and Rose Byrne, this sorority-themed sequel nominally offers a girl-empowerment theme ... for the young women's right to party hard (albeit without sexually aggressive fraternity guys to bother them). Expect nonstop swearing ("f--k," "s--t," and much more), drinking, drug use, and sex talk, with a few played-for-humor scenes of marital (and mid-pregnancy) sex thrown in, as well as one provocative strip dance by Efron's in which he goes full monty (but the camera shot is from behind, so only fake testicles are visible). It's not exactly Norma Rae or A League of Their Own, but the movie does bring up compelling issues about the double standards in Greek life, how girls deserve to have fun without feeling unsafe or harassed, and why the idea of "girls behaving badly" upsets people more than "boys will be boys."

Several marital sex scenes, but no nudity (the woman keeps her top on, while the man's bare chest, legs, and shoulders are visible). They're filmed for humorous rather than sensual impact, with silly dialogue, piles of cash, and the wife throwing up on the husband. A toddler plays with her mother's novelty sex toy. Tons of references to sex, virginity, and Teddy's sexual attractiveness. In one scene, he distracts the entire sorority with a provocative, suggestive dance; all the girls start clapping and moaning, and one later says she's not responsible for getting distracted because she's a "human woman" and needed to see Teddy dance. It's implied that Teddy shows his penis (he's shown from behind); a prosthetic pair testicles is visible between his legs. Kissing, making out. During a fraternity party, there's an arrow pointing up the stairs to the "Stairway to Heaven," and the fraternity brothers clearly want to have sex with anyone who will say yes; other parties show women in wet T-shirts, wrestling in Jell-O, etc.

The girls claim a party felt unsafe and "rapey." Jokes about a spiked punch that "Cosby'd" those who drank it. Two characters hit themselves very hard in the (helmeted) head when they deploy airbags to use their bodies to open a door. The girls chase "the old people" down, hitting and tripping them. Various pratfalls (including flying through a car windshield) and a couple of scenes of people slapping and pushing or falling. Couple of gross-out scenes.

The messages amid the over-the-top content range from girls'/young women's right to have ownership over their bodies and their leisure time (why should only fraternities have the right to throw parties?) and the idea that the worst feeling is to feel unappreciated or unwanted. The Radners continue to show how marriage and parenthood change your perspective on life. Humor based on the divide between "old" and "young," with general divides being made most obvious when it comes to using social media.

Even more than in the original, there are underage students drinking/doing drugs. The sorority is filled with first-year students; they binge drink, smoke a ton of weed (both as joints and via bongs), and then sell weed at a tailgate party. Character takes pain killers. Adults have to get bongs and other marijuana paraphernalia out of their house for an inspection.