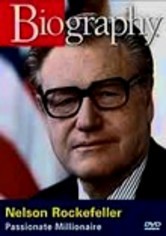 1997 NR 0h 50m DVD
Explore the life of politician, philanthropist and businessman Nelson Rockefeller, who overcame dyslexia to graduate Phi Beta Kappa from Dartmouth before entering the family businesses. He served as an assistant secretary of state during World War II, was elected governor of New York in 1956 and in 1974, was appointed vice president by Gerald Ford. And in both the public and private arenas, Rockefeller never failed to leave his mark.