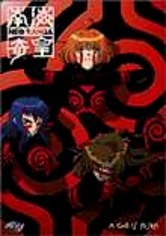 1999 NR 6 discs
After hibernating for centuries, the ancient god Neo Ranga inexplicably awakens on his small island home with people to see and things to do. Traipsing through downtown Tokyo doing his best Godzilla impression, he's on the hunt for three attractive sisters with mysterious ties to him. But the city of Tokyo, with its military strong-arming and growing mob mentality, may never let the intriguing connection be discovered.