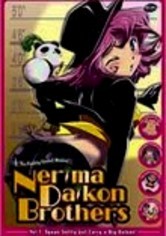 2006 NR 3 discs
Living on a stage constructed in a daikon radish patch, childhood friends Hideki, Ichiro and Mako -- along with their panda pal Pandaikon -- dream of building a concert dome in which their band, Nerima Daikon Brothers, can perform musical numbers in front of adoring fans. In the meantime, though, they sing, dance, farm daikon and fight the town baddies in this rare musical anime series from Japan.