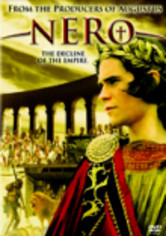 2004 PG-13 3h 12m DVD
Thrust into a position of ultimate power, Nero (Hans Matheson) battles an assortment of menacing conspirators in this epic miniseries that captures the grandeur and tyranny of the Roman Empire. Adopted by insane Emperor Caligula, Nero eventually assumes control and indulges in decadent delights. But Nero isn't the rightful heir, and his enemies lurk around every corner -- even within his own camp. Laura Morante and Mattias Habich co-star.