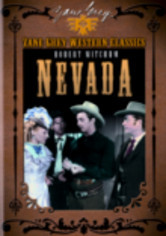 1944 NR 1h 5m DVD
A young Robert Mitchum portrays Jim "Nevada" Lacy in this classic Western based on Zane Grey's novel. Nevada wins a large sum of money and becomes the immediate target of clever crook Ben Ide (Lawrence Wheat), who steals Nevada's money. But the crooks and vigilantes aren't through with Nevada yet; soon enough, he's double-crossed and arrested for stealing. Nevada's time may be up unless he can escape from an angry lynch mob.