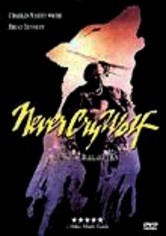 1983 PG 1h 45m DVD
Carroll Ballard's adaptation of Farley Mowat's autobiographical novel follows Mowat (Charles Martin Smith) into the tundra, where he's supposed to study the harm that wolves inflict on the caribou herd but struggles to make it in the harsh surroundings. He comes to the conclusion that the caribous' worst enemies are not the wolves at all. Hiro Narita's cinematography is spectacular, and the evocative sound was nominated for an Academy Award.

Parents need to know that this Oscar-nominated drama about a man in the wilderness includes some graphic animal eating scenes and some non-sexual nudity. Expect several perilous situations, pipe smoking, beer drinking, and a prolonged scene where man and wolf are juxtaposed eating mice. A few scenes show the main character naked while changing clothes, swimming, or running (brief full frontal, bare butt). Since the end isn't concrete, expect kids to ask questions about what happened after the credits roll.

No sex, but some non-sexual nudity. After Tyler falls in the ice, he has to take off his wet clothes, so his bare butt is shown. Later, he runs and jumps off a cliff naked -- briefly showing full frontal. A prolonged scene showing his bare butt as he runs with the caribou. Mike talks about a girl wanting to come home with him.

Almost a plane crash. A few sad and dramatic moments. Wolves chase the main character. He falls through the ice into the water. There's a prolonged graphic scene when he starts eating mice as an experiment. This is juxtaposed with a wolf hunting and eating mice. Wolves feast on caribou and its carcass is shown. Gunshots are heard in the distance. There's also a threat of an animal tearing a man apart and talk of killing wolves for money.

Many lessons about how one man can overcome his fears and disprove false beliefs. Also, watching Tyler on his journey brings home the realization that animals aren't that different from humans. A strong environmental message.

Many scenes of pipe smoking, mostly by the main character. Background cigarette smoking. Discussion of "Moose Juice," which is equal parts Moose brand beer and ethyl alcohol. Tyler uses it to conquer his fear of flying. He's shown drinking it throughout the movie.