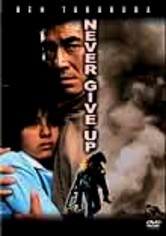 1978 NR 2h 23m DVD
After a mass murder in rural Japan, ex-special services soldier Ajisawa (Ken Takakura) adopts the young sole survivor of the massacre, who has no memory of the event. Later, in his civilian job as a claims adjuster, Ajisawa must revisit the crime scene, where suspicions arise about his involvement in the murders. Soon, Ajisawa finds himself the target of a persistent police detective, a corrupt politician and his former military unit.