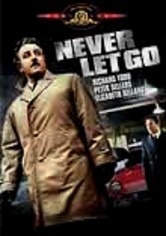 1960 NR 1h 31m DVD
Car salesman John (Richard Todd) can't seem to catch a break, so he decides to buy a car himself as a way to increase sales. But when his vehicle is stolen, John will stop at nothing to get it back, including tracking the man responsible to an underground auto-theft ring controlled by Lionel (Peter Sellers). John soon realizes that he's in way over his head when Lionel turns out to be nothing short of ruthless. John Guillermin directs.