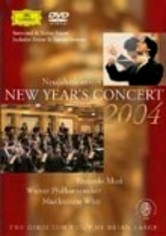 2004 NR 1h 52m DVD
One of the year's most anticipated classical concerts, this program filmed on January 1, 2004, features renowned conductor Riccardo Muti leading the Vienna Philharmonic Orchestra in a celebration of the New Year. The musical selections include songs from Johann Strauss and his sons Johann Straus II, Josef Strauss and Eduard Strauss, as well as from the elder Strauss's friend and musical rival, Joseph Lanner. A visual tour of Vienna is included.