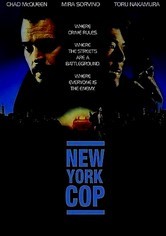 1993 R 1h 37m DVD
Japanese martial arts master Toshi (Toru Nakamura), working with the NYPD, infiltrates a gang of gun-runners called The Brotherhood, which services Colombian drug lords &NFiand&NFi_; the Japanese Yakuza. But after Toshi's fellow gang members betray him, he gains his revenge by snuffing out the bad guys (and we mean &NFiall&NFi_; the bad guys!). Co-stars Chad McQueen and Mira Sorvino.