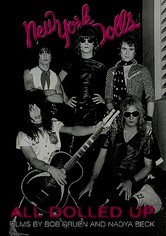 2005 NR 1h 36m DVD
Never-before-seen footage captured by rock photographer Bob Gruen and his wife, Nadya, presents the New York Dolls at the height of their outrageous powers, playing punk hot spots on both the East and West coasts. Tracks include "Human Being," "Bad Detective," Down, Down, Downtown," "Vietnamese Baby," "Personality Crisis" and "Subway Train." Candid interviews and backstage scenes reveal the bad boys of the band at their debauched best.