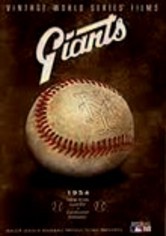 1954 NR 0h 37m DVD
Playing with grace and verve, Willie Mays led the New York Giants to victory in the 1954 World Series. This compilation features highlights from the series, recapping each game and adding dugout and locker room footage. Underdogs against the heavily favored Cleveland Indians -- who'd just completed a 111-win season -- the Giants managed to sweep the first four games and claim the championship from their stunned opponents.