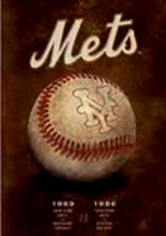 1969 NR 1h 15m DVD
One catch-all collection captures both of the New York Mets' World Series victories from 1969 and 1986 against the Baltimore Orioles and the Boston Red Sox, respectively. Vintage game-winning footage includes action from Tom Seaver, Jerry Koosman, Tommie Agee and Cleon Jones (all members of the 1969 team) as well as Lenny Dykstra, Mookie Wilson and Ray Knight (all from the 1986 lineup).