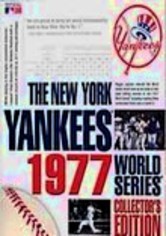 1977 NR 7 discs
The New York Yankees' 1977 season was one for the ages as the team systematically took apart their opponents, finally squaring off against longtime rivals the Los Angeles Dodgers for the title. This sports collection features the American League championship game and all six games of the thrilling World Series. Fans and pundits expected a classic matchup -- and weren't disappointed; decades later, this remains one of baseball's finest moments.