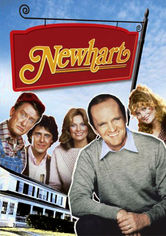 1982 NR 1 season
Bob Newhart plays Dick Loudon, an author of do-it-yourself books. He and his wife Joanna move from New York City to a small, unnamed town in rural Vermont to operate the 200-year-old Stratford Inn. Dick is a sane, mild-mannered everyman surrounded by a community of oddballs in a town which exists in an illogical world run by rules that elude him.

The eponymous star of "The Bob Newhart Show" returns to television as a writer of how-to books in the first season of this ensemble comedy. Newhart plays Dick Loudon, who's left New York City with his wife (Mary Frann) to manage a quaint inn in Vermont. Handyman George Utley (Tom Poston) and maid Leslie Vanderkellen (Jennifer Holmes) lead the supporting cast of quirky characters who make sure there's never a dull moment in the sleepy little town.