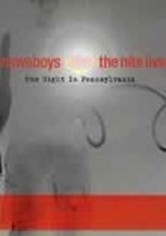 2000 NR 1h 30m DVD
Christian rockers the Newsboys (Jeff Frankenstein, Peter Furler, Duncan Phillips, Phil Joel and Jody Davis) deliver "Entertaining Angels," "Shine" and other hits in this rousing concert filmed in Hershey, Pa., during the band's 1998 "Step Up to the Microphone" tour. Other selections include "Take Me to Your Leader," "Spirit Thing" and "Everybody Gets a Shot." Spectacular special effects and messages of faith punctuate the group's performance.