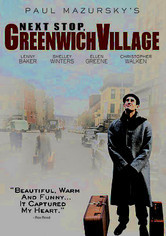 1976 R 1h 51m DVD
The bohemian paradise that was Greenwich Village in the 1950s comes alive in this nostalgic comedy by Paul Mazursky. Lenny Baker stars as Larry Lapinsky, a wanna-be actor who leaves Brooklyn for the romance and excitement of downtown Manhattan, much to the chagrin of his controlling mother (Shelley Winters). Cutting the ties isn't as easy as he expected ... and neither is carving an identity in a neighborhood filled with eccentrics.