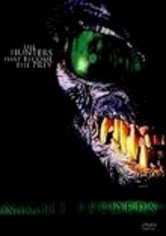 2006 R 1h 25m DVD
In the wake of a meteor crash that brings a nocturnal race of aliens hurtling to the Earth's surface, four unsuspecting Southern deer hunters get a taste of what it's like to be prey in this horror film. As they troll the woods for bucks and does, they have no idea that they're being hunted by creatures whose modus operandi is to devour every warm-blooded life form on the planet. Donnie Evans, Brett Gentile, Mike Monzitta and Michael Ruff star.