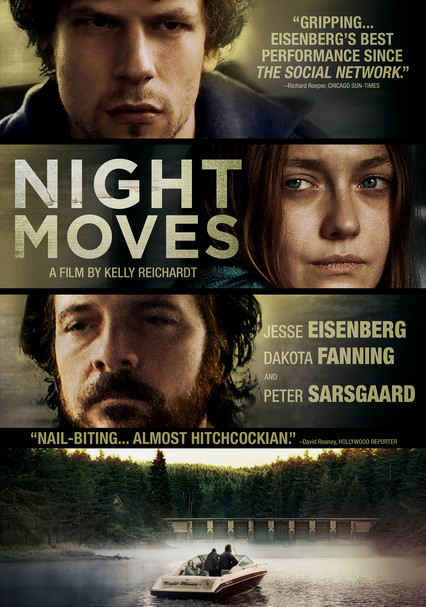 2013 NR 1h 52m Blu-ray / DVD
With their collective eye fixed on blowing up a hydroelectric dam, a pair of young environmentalists enlist the help of an ex-military explosives expert to carry out a dangerous act of eco-terrorism.

Parents need to know that Night Moves is a drama about a group of radical environmentalists attempting a dangerous protest. It's a slow but suspenseful movie with plenty of moments in which to ponder and reflect, and it raises ideas and questions about food, energy, consumerism, and more -- sharp teens will find much to think and talk about here. There's some arguing, a struggle, and death; animal lovers will wince at a scene in which a dead yet pregnant deer is found by the side of the road. Language is infrequent but strong, including a few uses of "f--k" and "s--t." At a sauna, several women are seen topless, and there's a suggestion of sex sounds heard outside a trailer (mostly playful giggling). Characters sip beer in one scene, and some brands are briefly mentioned, but mostly in a negative way.

A few middle-aged women are seen naked in a sauna; naked breasts are seen, although they wear towels or are generally shown from behind. In a later scene, playful, giggling voices are heard outside a trailer suggesting the possibility of two people having sex inside.

A man is killed (off screen), and a struggle between main characters results in an accidental death. A character finds a dead deer by the side of the road and discovers that it was pregnant and that its baby is still alive inside. He pushes it down a hill into the woods. Characters argue.

Without preaching or laying out its politics in any obvious way, the movie gives teens plenty to think about along the lines of food, energy use, and consumerism. The movie makes plenty of suggestions but provides no concrete answers, allowing smart teens to think for themselves.

The main character drives a Ford pickup truck, and the logo on the tailgate is on display more than once. Facebook and iPod are mentioned (albeit in a negative way).

The three characters sip from bottles of beer in one scene.