Night at the Golden Eagle 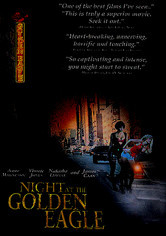 Night at the Golden Eagle

2002 R 1h 27m DVD
Tommy (Donnie Montemarano) is a lowly thug who's facing his not-so-golden years (he's about to turn 60!) with no decent prospects. Just released from jail, Tommy heads for the Golden Eagle with Mic, an old compatriot, deciding it's time to toe the straight-and-narrow ... but a murderous fit puts him right back in the center of trouble. Vinny Argiro and Natasha Lyonne also star.