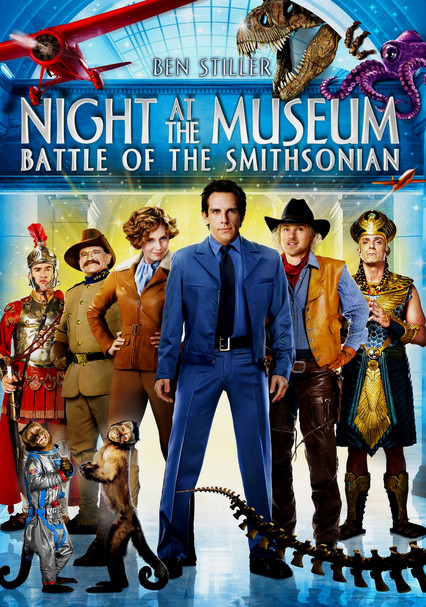 2009 PG 1h 45m Blu-ray / DVD
In this sequel to the hit comedy, Ben Stiller returns as hapless museum night watchman Larry Daley, who must help his living, breathing exhibit friends out of a pickle now that they've been transferred to the archives at the Smithsonian Institution. Larry's (mis)adventures this time include close encounters with Amelia Earhart (Amy Adams), Abe Lincoln (Hank Azaria) and Ivan the Terrible (Christopher Guest). Owen Wilson and Robin Williams co-star.

Parents need to know that this follow up to the smash hit Night at the Museum is very similar in content to the original movie -- so if your kids liked that one, they'll get a kick out of this one, too. Expect lots of generally lighthearted, effects-heavy chaos and action, with slapstick chases and confrontations and some moments of peril and danger (including scenes in which a somewhat scary giant octopus wreaks havoc and others involving creepy soldiers from the Egyptian underworld). Main characters get into fights and are threatened with weapons (guns, spears, swords) and words, but no one is seriously injured. One thing that's "missing" is the uneven father-son relationship from the first movie -- this one skips the family angst in favor of a more romantic subplot that helps keep things more upbeat overall. There's a little language and some kissing, but no drinking or smoking.

Some flirting, a few kisses (a couple fairly passionate), and a couple of innuendoes (the latter will likely go right over kids' head). A few naked/scantily clad statues, but nothing sensitive is shown.

Larry and his friends are frequently chased and threatened -- both verbally and with weapons (spears, lances, swords, guns) -- by Kahmunrah and his flunkies (which include Egyptian soldiers, '30s gangsters, Ivan the Terrible and his Russian hordes, and more), but no one is seriously hurt. Some fighting. Plenty of action and peril, but most of it comes with a lighthearted, adventurous tone. A giant octopus wreaks havoc in some scenes, which scare younger kids -- as could a creepy sequence involving a gate to the Egyptian underworld. Larry gets in a slapping match with a pair of monkeys.

The movie has a strong positive message about being true to yourself and doing what you love in order to be happy. Some rude behavior (especially on the part of a monkey), but less potty humor than in the first movie.

Wal-Mart is mentioned by name a few times, an obvious Microsoft Virtual Earth brand/label pops up on a computer screen in an early scene, Motorola and Apple products are used, and Larry discusses flashlight brands with another guard.