Night of the Blood Beast 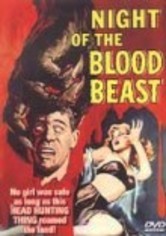 Night of the Blood Beast

1958 NR 1h 2m DVD
After astronaut John Corcoran (Michael Emmet) is impregnated with a litter of aliens in outer space, the bloodthirsty mother alien follows his rocket ship back to Earth to retrieve her offspring in this low-budget sci-fi thriller co-produced by Roger Corman. Back on Earth, the mother alien begins killing off workers at the space lab, and Corcoran awakens from a coma-like state to discover his body is host to dozens of tiny creatures.