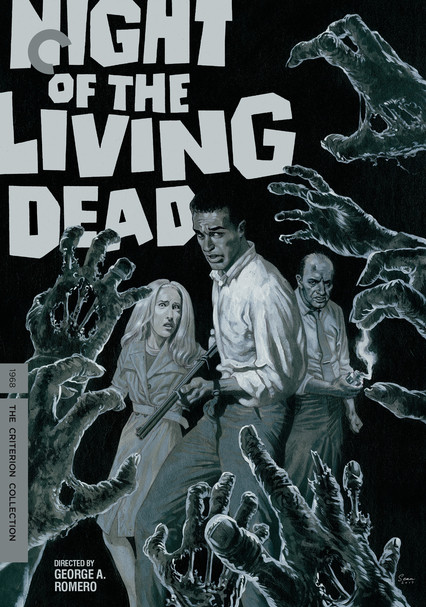 1968 UR 1h 36m DVD
As dead bodies inexplicably return to life and feast on human flesh, young Barbara (Judith O'Dea) joins a group of survivors in a farmhouse hoping to protect themselves from the hordes of advancing zombies. But soon enough, only one person remains. Writer-director George A. Romero's low-budget horror classic continues to inspire heebie-jeebies, in part because of the randomness of the zombies' targets.

Parents need to know that this was once considered the ultimate in gruesome horror, with its ghastly premise of armies of undead "ghouls" devouring and infecting the living. One of the zombies is a little girl who ends up killing her parents. The movie is claustrophobic and intense, with one of the most famously pessimistic endings in movie history. Though later cannibal-zombie movies pushed gore-makeup effects to extremes, this one is relatively restrained -- except for the Anchor Bay "Anniversary" edition that adds more severe carnage that was filmed later and edited in (along with the character of a nasty priest).

The ghouls can only be stopped, infamously, by being shot in the brain or beaten severely around the head. Others are set on fire. There is biting, dismemberment, and cannibalism. Often it's more suggested than shown (the sequels and imitations didn't hold anything back), but the "Anniversary Edition" adds some serious gore. Some fistfights and gunshots among the living.

Though the actors and filmmakers denied a sociopolitical agenda behind their horror show, there's a strong vibe here of organized civilization breaking down. The non-cooperation and selfish rivalries among the few survivors in the barricaded house causes more casualties. The positive portrayal of a strong, take-charge African-American lead was way ahead of its time -- too bad not many viewers noticed, amidst the chills.

At least these flesh-eating zombies don't sell out.