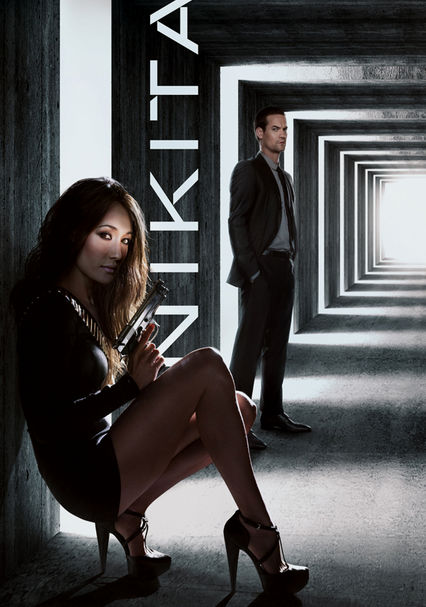 2010 NR 4 seasons
Nikita is one of the most highly skilled assassins on the planet, and her target is the mysterious corporation that created her. The Division, as it's known, picks up at-risk teens to train as killers, and Nikita will do anything to bring it down.

Hired assassin Nikita maintains absolute loyalty to a secret U.S. intelligence agency until she discovers that her superiors have betrayed her. She retaliates by dropping her cover and setting out to expose the agency's illegal covert operations.

Nikita is out to destroy the secret agency that made her a perfect killer, and this explosive season unites her with a longtime foe. Together, they face Nikita's traitorous protégé, Alex, who's armed with deadly skills she learned from the master.

In the third season of this stylish thriller, deadly assassin Nikita and the double agent helping her from the inside continue to battle Division, a shadowy U.S. agency that turns juvenile offenders into trained killers.

Former death row inmate Nikita was given a new life only to be recruited into a secret government unit specializing in black ops and assassinations. After breaking free of the agency, Nikita is now determined to bring down her former bosses.

Parents need to know that, like the TV and movie versions of the story that came before it (both called La Femme Nikita), this action series about a former assassin who's vowed to bring down the shadowy government agency that trained her to kill includes plenty of highly efficient action sequences as these human fighting machines go to work on each other with guns, knives, and sometimes their bare hands. Women sometimes go on missions in skimpy attire and are sometimes shown in their underwear for no obvious reason. Parents can also expect mild swearing (like "bitch") -- but the fighting, sometimes to the death, is the biggest red flag here.

Nikita is a trained assassin who can kill with her bare hands. Major fight sequences incorporate guns, knives, and other weapons, sometimes to the death (but with little blood/gore). Enemies often commit torture using violence, including electrocution. The violent death of parents is discussed.

Revenge is a major theme in the show. Loyalty is also important here. Some confusing messages about women who are violent and sexy at the same time.

Logos for products like Jeep vehicles and Dell computers are visible.

Drinking at social functions is visible. Drugs and poisons are often used to subdue operatives.