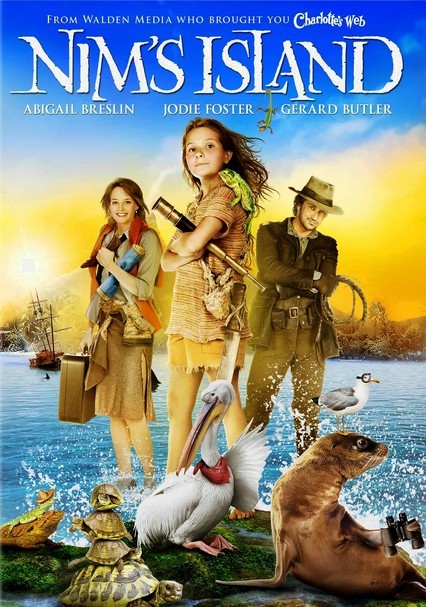 2008 PG 1h 35m Blu-ray / DVD
When young island-dweller Nim Rusoe loses contact with her scientist father -- who's lost at sea -- she reaches out to her favorite author for help. But the writer is a recluse who hasn't left her house in years.

Parents need to know that this kid-friendly adventure movie has some intense moments of peril (particularly during two scary storms) but is ultimately a positive story with a great role model for tween girls (and boys!). The book-and-science-loving 11-year-old heroine is left alone on a tropical island by her father (her mother died when she was a baby, which is explained in the opening sequence) and has to fend for herself when he's delayed in getting back to her. She gets scared and upset and even hurts herself, all of which may bother some young and/or sensitive kids, but she's also resourceful and not afraid to ask for help.

Tourist beach scenes include some women in skimpy suits and/or showing cleavage.

Several intense storm sequences in which boats are capsized and/or destroyed and people are in danger. Sharks threaten Jack's boat. Jack is knocked out at one point, and Nim scrapes up her knee pretty badly (some blood is shown) falling down a mountainside. The volcano rumbles and spews steam and ash, putting Nim and some tourists at risk. Nim uses a machete for lots of her island tasks, and Alex's hero carries ammunition. Some of the fantasy sequences he's in include fights with swords and other weapons, as well as life-threatening peril, but it's not very scary. The opening credits explain that Nim's mom died when she was a baby (it's told via animation but is still sad).

Nim is a strong, independent, resourceful girl who loves reading, nature, and science -- in other words, she's a great tween role model. Alex overcomes a lifetime of fears to help Nim. In helping each other, they both learn how to "be the hero of your own life story." On the downside, Jack does leave Nim alone on the island, but neither of them anticipates what will happen, and he works tirelessly to get back to her. Australian tourists are presented as a loud, oblivious, selfish horde, which is used to justify Nim's attempts to trick and scare them.