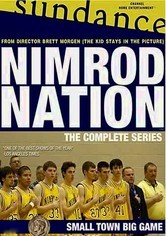 2008 NR 2 discs
This eight-part series takes viewers to Watersmeet, a berg of 1,500 people in Michigan's Upper Peninsula, where a love of the outdoors and a fanatical devotion to the town's high school basketball squad -- the Nimrods -- unites the community. Filmmaker Brett Morgan provides an absorbing glimpse of small-town life as he follows the team, named for a biblical character famed for his hunting prowess, through their 2005-2006 season highs and lows.