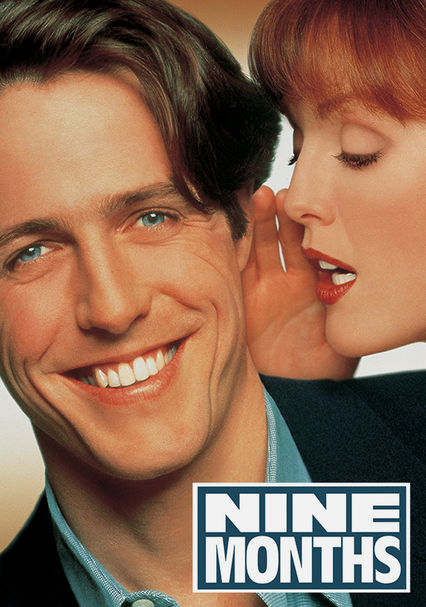 1995 PG-13 1h 46m DVD
Child psychologist Samuel Faulkner doesn't actually want kids of his own. When his girlfriend Rebecca gets pregnant, he must decide whether to change his perspective or let Rebecca raise the child by herself.

Parents need to know that Nine Months is a '90s romantic comedy about an unexpected pregnancy and the main character learning to accept responsibility and embrace change. The all-adult cast talks frequently and frankly about sex and reproduction. The only things shown are kissing, caressing, undressing, and lying in bed. A childbirth scene is played for comedy, and there's a lot of screaming, yelling, and even a fight. A couple of mildly scary dreams, also played for comedy, involve being eaten by a praying mantis. Other violence involves a cartoonish fight with a costumed dinosaur children's character. Most of the story and comedy rely on stereotypes (such as men being afraid of commitment) and dated or inaccurate depictions of pregnancy and childbirth (such as a high-speed, reckless ride to the hospital with a woman in labor). Frequent profanity includes "f--k" and "s--t" as well as such things as "d--kbrain horses--t son of a whore."

All-adult cast talks frankly about sex and reproduction issues including desire, satisfaction, birth control, menstruation, whether sex hurts the unborn baby, and more. Abortion is mentioned once. Kissing, caressing, undressing, and lying in bed are shown. A newborn is mentioned having large testicles, implying inherited masculinity.

Occasional fights and pratfalls played for comedy. Two men fighting with a costumed children's dinosaur character throw punches, kicks, and hits with a toy bat. Sam has a couple of mildly scary dreams about being eaten by a female praying mantis. A childbirth scene involves yelling and screaming; no body parts or gore are shown, and the newborn babies look wet and gooey.

Accepting and living up to your responsibilities leads to some of life's greatest rewards. Don't throw away the best things in your life just because you're afraid of change and responsibility. Stereotypical gender roles include a man thinking his girlfriend is trying to entrap him with a pregnancy and that a woman should want an unexpected baby because it's a privilege and a miracle.

What to Expect When You're Expecting book shown prominently.

Adults drink wine and beer at parties and family gatherings. A woman in labor asks for drugs; a hypodermic for an epidural is shown but not administered.