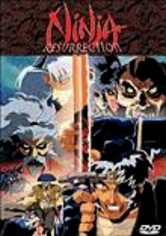 1998 NR 1h 40m DVD
Get ready for a nightmarish journey through faith and betrayal as the infamous Jubei Yagyu wields his deadly blades against the forces of good and evil alike. When a group of rebel priests declares the religious rebel Shiro Amakusa the anti-Christ, Shogunate officials dispatch Jubei Yagyu to deal with the matter. To his horror, Jubei finds that the priests are right. Now, he must battle a horde of demons to destroy their satanic master.