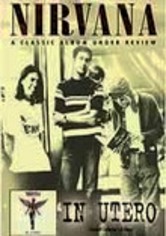 2006 NR 1h 3m DVD
Named for Nirvana's final (and most musically challenging) album, this retrospective survey provides an analytical overview of the grunge band that exploded into the mainstream with the 1991 hit "Smells Like Teen Spirit." Top music journalists and critics revisit each of the group's three studio albums. Rounding out the video are Nirvana's first radio performances, footage from live gigs and interviews with front man Kurt Cobain's family.