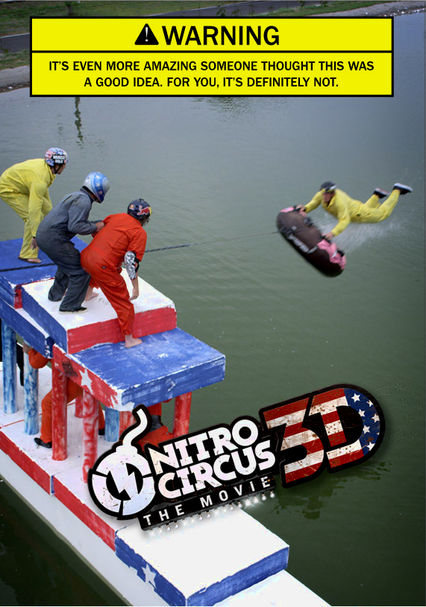 2012 PG-13 1h 28m DVD
Enter the adrenaline-fueled world of freestyle motocross rider Travis Pastrana and his pals as they travel the globe performing outrageous stunts, including flipping a Big Wheel over a 70-foot gap, jumping out of a plane with no parachute and more.

Parents need to know that Nitro Circus: The Movie 3D is a big-screen version of MTV's Travis Pastrana and his band of crazy stuntmen doing their usual dangerous, over-the-top stuff. Expect tons of wild stunts -- mostly involving sending various vehicles up and over ramps -- as well as lots of crashes and injuries; one character survives a horrible car crash and goes to the hospital. Language is fairly strong; "f--k" is bleeped, and "s--t" is sometimes, too, but not always. The team's lone female member is seen posing for sexy pictures while wearing a revealing leather outfit. There's also heavy product placement, as several sports drinks are corporate sponsors. These guys have many young fans who will be clamoring to see this movie and, despite a warning at the beginning about not trying this stuff at home, possibly eager to try similar stunts themselves. So beware.

The lone female member of the team, Jolene Van Vugt, is shown taking sexy pictures during the film's opening minutes. She wears a revealing, tight leather outfit. But during the rest of the movie, she appears normally and is just one of the "guys."

No weapons or blood, but there are many scenes of gratuitous, life-altering violence, including dozens of car crashes, bicycle crashes, and many other crashes. Human bodies slam into the ground or water with horrible, painful impact. Some characters sustain bruises or painful injuries, and sometimes they're taken to the hospital for treatment.

The characters are ridiculed for being outsiders and then celebrated for their "courage" in performing these ridiculous stunts -- which unfortunately make them famous. Characters also tease each other while preparing for stunts. That said, the movie does come with the usual warning against trying these stunts at home, and there are consequences in at least one case: one stunt goes terribly wrong, and a driver is sent to the hospital.

The cast members have corporate sponsors and are constantly seen wearing T-shirts and hats with corporate logos. Logos also appear on various vehicles. They're mostly for sports drinks: Red Bull, Muscle Milk, Rockstar, and Monster. Suzuki is also a sponsor.

Alcoholic beverages are mentioned, as in "I'm going to go have a beer," but nothing is actually shown. "Moonshine" is mentioned.