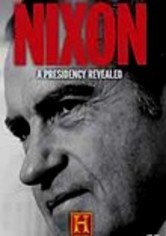 2007 NR 1h 34m DVD
More than three decades after the notorious political scandal that ended his career, this revealing documentary explores the legacy of President Richard Nixon. Newly released audio and never-before-seen footage shed light on Nixon's administration, from the heights -- his historic trip to China and the end of conflict in Vietnam -- to the shocking lows that made his name synonymous with political deception.