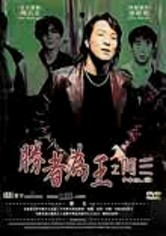 1997 NR 1h 48m DVD
An aging gangster rises from the ashes in this dark comedy. A longtime crime syndicate member, Tae Ju (Han Suk Kyu) worries that his days are numbered. Hoping his gang will branch out, he brushes up on foreign languages and continues to commit perfectly ruthless crimes to ensure job stability. But things turn around for Tae Ju after he saves his boss (Ahn Seok Hwan) from a hit man. Song Gang Ho, Park Sang Myeon and Choi Min Sik also star.