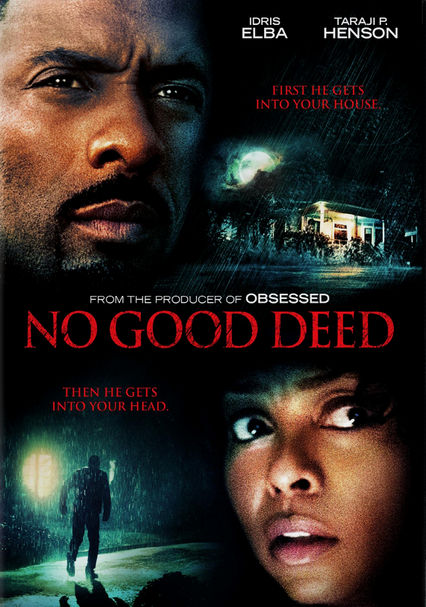 2014 PG-13 1h 24m Blu-ray / DVD
When a stranger comes to Terri's door saying that he's had car trouble, she invites him in. But soon, she's the one in trouble as the man reveals himself to be a desperate prison escapee bent on holding Terri and her two children hostage.

Parents need to know that No Good Deed is a thriller about women and children being stalked and terrorized by a male killer. There's a pervasive sense of terror, and men are shot with guns, while women are bashed with blunt objects. One woman bashes and stabs the killer several times, but it has no effect. Wounds are shown, but the blood isn't excessive. Dead bodies are also shown. Language is infrequent but includes "f--k" and "s--t." Characters undress, but nothing sensitive is shown; it's all kept below the frame. Characters also dress in sexy outfits, and one talks excessively about sex. Characters drink wine and beer socially, and in one scene, a character gulps his glass of wine. A character smokes a cigarette. The movie's treatment of female characters is potentially offensive, as is its negative depiction of African-American characters.

One supporting character seems to be thinking about sex all the time. She's shown in a sexy jogging outfit and notices a shirtless worker nearby. She flirts with another man and talks about her carefree attitude toward sex. Another woman is shown in a revealing, low-cut dress. The killer forces the main character to change clothes; she removes her top, but nothing sensitive is shown -- it's all kept below the frame. The killer takes a shower to remove fire extinguisher chemicals from his face. He forces the woman (clothed) into the shower with him. He's naked, but nothing is shown. A secondary character is shown to be having an extramarital affair.

Pervasive threat of violence against women, as well as some actual violent incidents. A young girl and a baby are in danger. The killer shoots and kills two (male) guards and a male cop. He kills a woman by breaking her neck and smashing her head (off screen) with a telephone. He kills another woman by smashing her in the face with a shovel. A woman bashes the killer over the head with a fire extinguisher and a lamp and also stabs him with a knife, but he's not stopped until she shoots him several times in the chest. Bloody wounds are shown. There's also a car crash on a rain-slicked street.

The main message here is try to be a little bit smarter when a movie serial killer tries to play all the same old dumb tricks on you. Women and children are in peril throughout the movie. The killer shoots his male victims but bashes the female ones with blunt objects.

Characters casually drink beer and wine. One character gulps down a glass of wine, but nothing comes of it; he doesn't seem drunk, and he doesn't drink much more afterward. A secondary character smokes one cigarette.