No Mercy, No Future 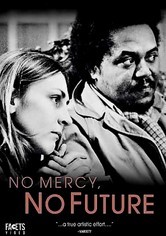 No Mercy, No Future

1981 NR 1h 48m DVD
Roaming the night streets of Berlin in search of God, an untreated schizophrenic woman (a flawless Elisabeth Stepanek) from a wealthy family gives herself over to various men from the dregs of society. The bleak and brutal West German drama was improvised from a series of letters written by a real-life schizophrenic woman. The film earned director Helma Sanders-Brahms the Sutherland Trophy at the 1981 British Film Institute Awards.