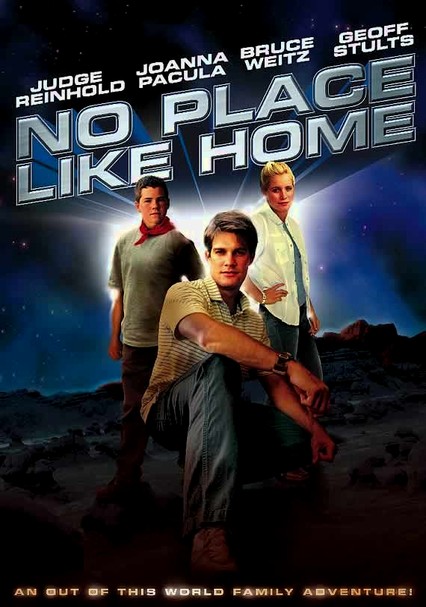 2002 NR 1h 28m DVD
A teenage girl and her younger brother discover an alien that has crash-landed on Earth and take it into their home. While trying to hide the alien from their divorced father, the kids bond with this special visitor who possesses miraculous powers. Judge Reinhold, Adrienne Barbeau and Joanna Pacula star in this touching and fun-filled family sci-fi adventure.

Parents need to know that No Place Like Home -- a predictable story about an alien discovered by a teen sister and brother -- has some name-calling between siblings. Also, a man makes a homophobic insinuation at the expense of a female law enforcement official. Aside from this, have fun keeping track of all the 1980s film and television stars packed into this otherwise unremarkable movie.

An alien who looks like a man in his early 20s is shown naked behind a bush covering his private parts. A sister accuses her brother of having a "dirty magazine" under his mattress.

Early in the film a rabbit is run over by a jeep. A boy crashes into a rock and hurts his head.

"Hell." One character calls another a "pervert." A brother tells his sister to "bite me."

In the words of the film's title, there is "No place like home."

When talking about the sheriff who's truck has broken down in the middle of nowhere, one character asks another if the sheriff has been drinking again.