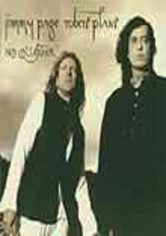 1995 NR 1h 33m DVD
Led Zeppelin broke up in 1980 following the death of drummer John Bonham, but in 1994, singer Robert Plant and guitarist Jimmy Page got back together to record an MTV special and an album featuring a selection of new songs and Led Zeppelin favorites. This look at Page and Plant includes performances of seven partially acoustic tunes such has "Wah Wah," "Gallows Pole," "Kashmir" and "When the Levee Breaks."