No Rest for the Brave 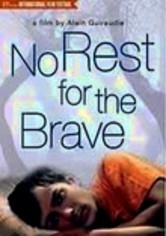 No Rest for the Brave

2003 NR 1h 44m DVD
Reality, dreams and nightmares swirl together in this surreal tale of French teen Balise, who's convinced he'll die if he falls asleep, so he goes on the run through the countryside while being chased by a detective and various hit men. Alain Guiraudie's beguiling debut feature swerves unpredictably between road movie, coming-of-age comedy, gangster and other genres. The Village Voice called it "one of the best French films of recent years."