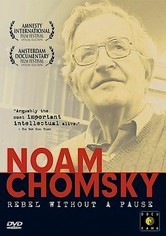 2003 NR 1h 15m DVD
MIT professor and respected political analyst Noam Chomsky speaks his mind on sober issues including the U.S. war on terrorism, anti-American sentiment, media manipulation, the after-effects of 9/11, and social activism at high-profile gatherings. The film also features interviews with his wife, activists, fans and critics, and examines the truths and myths surrounding the anti-capitalist and longtime advocate of liberty and justice.